Skip to Content
Home What I'm Voting For Paying It Forward

My grandparents were both born and raised in Havana, Cuba during the years following World War II. They lived under U.S.-backed fascist military dictator Fulgencio Batista and a line of his puppet presidents for most of their time in Cuba. It was this government that led my grandfather to join the revolution. It was what got him arrested, and it was why he had to leave, at least the first time.

The second time was a bit more complicated, as my grandfather returned to Cuba to find that it hadn’t changed in the way he had hoped it would with the success of the revolution. According to him, what he found was a totalitarian government that would ultimately threaten my grandmother’s, great-grandmother’s and great-uncle’s lives. My grandfather wouldn’t know of this experience for a few more years, but all parties involved ended up leaving regardless.

I want to preface that I’m telling you this not to elicit sympathy or feed into some racist and capitalist view of communist countries, but rather to make it clear that I’m voting for immigration — perhaps shockingly — as the socialist grandchild of reactionary, conservative, Republican Cuban refugees. My reasoning is this: my grandparents got lucky for a number of reasons, all ultimately a reflection of McCarthy-era U.S. immigration policy in the 1940s and ‘50s. They were white and educated enough and a solid propaganda tool to be used at the height of the Red Scare. I don’t agree with my grandparents on most issues, especially their trauma-informed hatred of any social program that exists in this or any other country, but we do agree that immigrants, whether documented or undocumented, are the backbone of this country.

I believe in paying it forward, in fighting for those who have lived through similar circumstances but whose national, racial and religious designations, among others, have kept them from the same considerations and privileges my grandparents were granted in 1960.

If you know anything about refugees, you know that their paths to permanent residence and eventual citizenship can be more straightforward than immigrants who come here by choice. But only once they’re actually in the country. This is not to say that being a refugee is easy, by any means. Rather, because the assumption is that their home country is not fit to return to due to some immediate threat of harm, refugees often experience a significant amount of trauma both before and after their departure.

In many ways, it is exactly due to the fact that a refugee cannot return to their country that allows refugees much easier access to greencards and citizenship. Technically, for a refugee or asylum seeker, their first official day in the U.S. begins five years of permanent residence that can eventually lead to citizenship. However, since refugee designations and asylum are hard to come by, especially in the current political climate, desperation reigns supreme.

One of the best examples of this desperation today is found in “el triángulo norte,” or “the northern triangle” in Central America: the countries of Honduras, El Salvador and Guatemala. With some of the highest homicide rates per capita in the world, chronic political instability and often extreme levels of poverty. By most standards, these countries would be given designations allowing migrants access to asylum, refugee and temporary protected statuses.

After all, the U.S. often directly orchestrated the coups and civil wars that directly led to the pervasive corruption and violence in this region due to its imperial pursuit of resources like coffee, fruit and oil. The U.S.’s Cold War-era anti-communist heavily influenced its actions in this region as democratically elected socialist governments cropped up all over Latin America. We created the conditions that thousands attempt to escape every year. However, in the post-9/11 era, immigration has become a matter of national security, geared more toward identifying and excluding “outsiders” rather than incorporating groups without which this country may have never existed and would crumble without.

Our immigration system is one that requires large groups of migrants to travel over 2,500 miles by foot in caravans of hundreds or thousands of people, only to be turned away at the border and left vulnerable to kidnappings, sexual assault and murder while awaiting asylum in Mexico.

Our immigration system is one that leads children to climb on the tops of gang-controlled cargo trains in the hopes of reuniting with their families, only to fall off and lose their limbs — or their lives.

Our immigration system is one that builds up border patrol and pushes migrants away from entry cities and into severe environments where they are left vulnerable to unforgiving landscapes with no access to resources.

Our immigration system is one that detains families and separates children from their mothers, and allows children to die of neglect in metal cages.

Our immigration system is one that indiscriminately targets good citizens and criminals alike, ruining families with their deportations and even conducting illegal, unsolicited sterilizations on women in ICE detention.

It’s worth noting that this is a lot bigger than Trump, although he definitely has not helped anything related to immigration policy. After all, in just four years he pushed a policy that kept migrants in Mexico vulnerable to cartel and gang activity and separated thousands of families from their children. His administration has attempted to end temporary protected status for migrants from what are among the lovingly termed “sh*thole countries” and fomented xenophobia and anti-immigrant sentiment as few others have. This all is in addition to his numerous attempts to end DACA protections for the 825,000 people that the program has helped since 2012.

Regardless, it bears mentioning that the Obama administration deported more people in eight years than any other administration in history. This was at least partially due to the definition of “deportation” being more loosely defined under his administration. What this pattern shows is that this issue is systemic. No single election will fix it, but immigration reform is not possible without elections and voting. These policies are top down, heavily influenced by our federal government. No matter how much I wish it were so, community organizing alone will not be enough to change the material conditions of the estimated 10.5 million undocumented immigrants in the U.S. that live in constant fear of deportation. It won’t be enough to get migrants out of camps on the border, and it definitely won’t change the situation in these migrants’ home countries. So, I’m going to vote. I hope you do, too.

Coulture’s mission statement says that we aim to be a magazine for people of all shapes and sizes, for those who speak up and stand out. We recognize that it is important to hear from people with personal views, strong perspectives, and something to say. This article is part of Coulture’s “What I’m Voting For” initiative where members write about the issues they care about in the 2020 election. 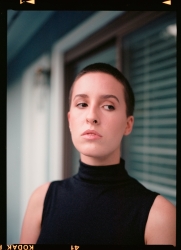 Clara Luisa Matthews
Clara is a senior and the Editor-In-Chief of Coulture, alongside Sterling Sidebottom. She is an advertising major in the UNC Hussman School of Journalism & Media and is pursuing minors in Spanish Language for the Business Profession and Women's & Gender Studies. Clara is passionate about beauty, fashion, music, television, advocacy, spending time with her friends, prosecco and her favorite custom sandwich at TRU Deli & Wine Bar.

Clara is a senior and the Editor-In-Chief of Coulture, alongside Sterling Sidebottom. She is an advertising major in the UNC Hussman School of Journalism & Media and is pursuing minors in Spanish Language for the Business Profession and Women's & Gender Studies. Clara is passionate about beauty, fashion, music, television, advocacy, spending time with her friends, prosecco and her favorite custom sandwich at TRU Deli & Wine Bar.